It's time to laugh at more stupid British Nazi Lovers:

UKIP: Nazi storm as candidate mocks up picture of himself posing with Adolf Hitler
2 May 2013 08:45 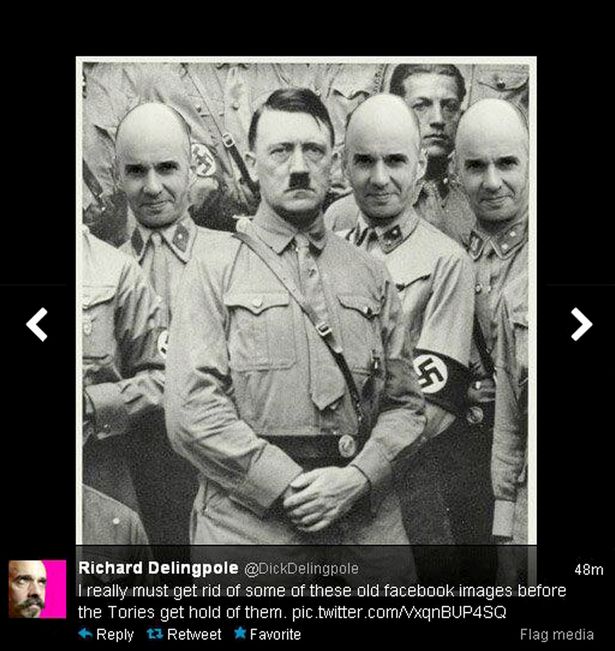 UKIP’s Nazi shame surfaced again today after one of its candidates in tomorrow’s elections tweeted mocked up pictures of himself with Adolf Hitler.
Richard Delingpole said the image was a “joke”. But opponents branded it “sickening and abhorrent”.
He is the latest embarrassment to the party – after UKIP’s Alex Wood was exposed making a Nazi salute and pictured with a knife between his teeth in the Daily Mirror.
Mr Wood himself has been mocked for his excuse that he was simply “reaching for a friend’s phone”.
And UKIP leader Nigel Farage claimed Mr Wood had been “imitating a pot plant”.
Mr Farage also came in for criticism today when the party’s battle bus was parked in a disabled bay during a campaign stop in Ramsey, Cambridgeshire.
When a passer-by moaned, he said: “You can’t blame me for everything.”
Worcester candidate Mr Delingpole – brother of writer James – said the image was posted after reports Conservatives were trawling UKIP members’ Facebook sites.
He added: “It shows that we have a sense of humour.”

Well, that ought to come in handy right about now, cuz we have a sense of humor too.
Just shopping yourself with Der Feurer doesn't mean as much by itself.   But not speaking up about  Anna-Marie "Holocaust Denier" Crampton does: 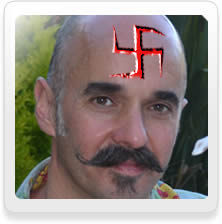 He says it's no more than a joke:

A message under a copy of the doctored image reads: “What was a secret until now is my Nazi past.
"As the photo above proves beyond doubt, I was present at one of Hitler’s rallies.
"And in case you hadn’t yet worked it out, this is all utter nonsense.
“But it has been seized upon by my Tory opponent in Thursday’s local election.”

We could believe that possible except for two things:

1: The founder of the UKIP has gone on record saying the party was infiltrated by far right racists
2: All the candidates keep slipping up with this shit.  That implies the stress of the campaign is making these closet Nazis slip up in ways they usually don't.

Of course his opposition isn't impressed:

Simon Geraghty, a Tory ­candidate in Worcester, said: “I find it absolutely sickening and abhorrent.
"The vast majority of British people will find this shocking. It’s not funny.”
A Board of Deputies of British Jews spokesman said: “We are surprised at his poor taste.”
Local UKIP party organiser Carl Humphries said: “Delingpole is not a Nazi – he’s got a deep sense of humour.”
As UKIP continued to predict huge election gains, David Cameron today refused to mention them by name in a 15-minute interview.
But he hinted some of his family might vote for them and played down claims UKIP were “fruitcakes and loonies.”
Meanwhile Foreign Secretary William Hague said he agreed with Ken Clarke that UKIP had a “clown-like” aspect.

Well, that's one thing we can agree on.  Only a clown would push Climate Change denial:

Secretary
Richard was born in Worcester and now resides in St. Johns. He is an artist and graphic designer by profession, and a Napoleonic re-enactor and Chairman of Worcester Re-enactors in his leisure time. He has a son at the Worcester Tech, and a daughter at Christopher Whitehead Language College.
Why did Richard join UKIP?
"I joined UKIP because I see them as the only viable choice for a former conservative who still believes in small government, low taxation and personal liberty. I have a particular interest in the lie of Anthropogenic Global Warming and the corruption at the heart of the renewables industry."