NSM 88: Nazis in My Occupy Return to Atlanta

Now, I don't know about y'all, but I sure as hell didn't come down from the goddamn Smoky Mountains, cross five thousand miles of water, fight my way through half of Sicily and jump out of a fuckin' air-o-plane to teach the Nazis lessons in humanity. Nazi ain't got no humanity. They're the foot soldiers of a Jew-hatin', mass murderin' maniac, and they need to be dee-stroyed. 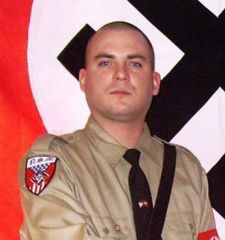 http://www.nsm88.org/announcements/announcement_nsmca_pomona.htm
Looks like your pals on the other end of the political spectrum want to help out a bit.

According to the Georgia State Capitol Events webpage, The neo-nazi organization National Socialist Movement (NSM) along with other racist white supremacist groups such as the Ku Klux Klan will be holding their 2013 National meeting & anti-immigration rally in Atlanta and it's no coincidence that they are doing it on Hitler's birthday. Although the meeting is being held in an undisclosed location, here is the info for the rally:

This call to action is really short notice, but these racist pieces of shit aren't fucking welcome here or anywhere so get together with your ppl and come out to make sure they know this!!!!!!!! Bring banners, drums, pots, pans, whatever.


"VikingRage Hosting"?  That says it all.

So who's the one funding all this "National Socialism"?

NSM Rally in Charlotte, NC. on Saturday, Nov. 10th. For more information or carpools see our Party mainsite. You know the link. Thanks!


We agree we like our Nazis in uniform.  But failing that...


Interestingly, he seems to have shacked up with a not quite pure white woman. at least according to his former fans:


NSM "Commander" Jeff Schoep is scheduled to appear in court Monday along with his wife Johanna to end their marriage after he found a new girlfriend in fetish model Camilynn and moved her into the home he shared with Johanna. In the wake of this, Johanna revealed to several outlets, including One People’s Project, of the mixed race lineage of not only herself, but of her daughter as well, whose father is black. Jeff Schoep long denied this to his supporters and members, but in the wake of the news being confirmed by Johanna, members have been rumored to be leaving the NSM in droves.

The real question is how could Johanna be dating a racist.   Maybe a woman's love can cure him...


Also from One People's Project: