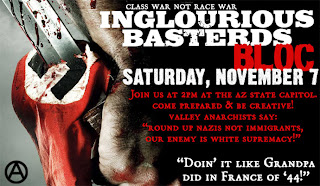 
The Phoenix Class War Council is pleased to announce the formation of the Inglourious Basterds Bloc, a temporary anti-racist, anti-authoritarian convergence for the purpose of confronting the National Socialist Movement at the November 7th anti-immigration rally.

Some have said that ignoring the Nazis is the best tactic to take. They point out that the NSM only wants publicity and if we confront them, it will give them exactly what they want. We at PCWC, however, take the exact opposite position. We think that, for once, the NSM ought to get some publicity. Why is this?

For a variety of reasons -- not least of all the weak position taken by the established pro-migrant organizations in town -- the so-called "nativist" camp has succeeded in normalizing an extremely reactionary argument on immigration. In Arizona, the debate and policies have lurched so far to the right that outright racist arguments don't stand out as starkly as they otherwise would. This has had tangible and unmistakable effects, from the massive numbers deported (or, "self-deported" out of fear) to the incarceration, profiling and round ups of hundreds of thousands.

It is this climate that has attracted the NSM here and it has not gone unnoticed that various clownish, though frequently armed, Nazis have begun showing up at pro-migrant marches, sieg heiling their little hearts out. Because of the congruence between the mainstream nativist camp (it pains us to acknowledge such a thing exists) and the positions of the NSM, we think it is useful to point out the cozy nature of their arguments. Ever faithful to their reputation as stooges and government dupes (how many Feds are in the group, we wonder), the NSM is doing the work for us.

If Americans can be counted on for anything, it's for hating Nazis, and images of brownshirted fascists in full historical reenactment regalia (or, alternately, dressing like SWAT team wannabes) spouting their anti-immigrant nonsense will highlight the extreme nature of what passes for the mainstream discussion in Arizona, and to show that there is strong resistance to it. The NSM's traveling circus affords us the opportunity to twist their spectacle to our ends.

We at PCWC also want to extend a particular invitation to our friends in the Libertarian movement. Because of your vigorous protests at Obama's recent speech, you have been painted as racist. We know that you feel this is unfair. You see yourselves as protesting this country's turn towards fascism. We sympathize with this argument and are ourselves no fans of the Obama administration. However, we want to point out that unlike some of your past protests, the NSM rally offers you the perfect opportunity to make known your opposition to fascism in an unambiguous way. We hope you come to the event.

We are not here to preach tactics nor to lecture anyone on the law. People can think for themselves. Similarly, we are an autonomous working class force, and we are beholden to no politician or self-appointed movement leader. We speak for ourselves and no one else and we claim no monopoly on good ideas for confronting these Nazi thugs. We hope a variety of creative and interesting tactics are employed by as broad a collection of people as possible. Remember, the NSM wants a show, so we encourage all participants, regardless of their level of militancy, to treat the event as a stage. Further, it should be pointed out that militancy does not necessarily have to manifest itself in the obvious ways. Think imaginatively and we're sure that many opportunities to show up these Nazi buffoons will present themselves.

Likewise, to those in the anarchist and anti-authoritarian milieu who think that taking on Nazis misses the overall context of the broader system of white supremacy, we encourage you to investigate the political situation in Arizona. As we have already pointed out, the dialog here has swung so far to the extreme right that, sadly, fertile ground exists for these boneheads. Saying we shouldn't focus on Nazis is like saying that folks shouldn't have gone after the Klan in the 50's and 60's. Our politics focus on the revolutionary importance of attacking the system of white supremacy, and that does not preclude going after the militant manifestation of white working class reaction. We recognize your criticisms and we invite you to join us on November 7th regardless.

We are working class and we reject the backwards anti-liberatory positions of the National Socialist Movement. True liberation for the working class can only come about by destroying capitalism and the state, and in the United States this means attacking white supremacy, the cross-class alliance that holds the Empire together and keeps the capitalists sitting pretty in their mansions and private jets. It's the pathetic, reactionary alliance of white supremacy that undermines our class war against the rich and transforms it into an inter-class civil war, benefiting only the ruling class. The retrograde racism of the NSM is a step backwards for working class people. PCWC rejects it unequivocally and instead we demand free movement for free people.

Against all borders! See you in the streets!

For a fuller understanding of where we're coming from, read this piece:
The NSM offers nothing for the white working class but more exploitation and misery.
at 5:04 PM